I know some of my readers are snake sensitive.  Mom, don’t read the last two paragraphs of this segment.

In this eight month period Hayes doesn’t move far – just a little up and down the Australian east coast getting together a bankroll to pay for return to the US.  Then you’ll really get to see him moving fast.

When Greer and Hammond “decided to freeze [him] out of the plantation deal,” Sydney was too rich for Hayes.  The Australian government was about to begin building a new naval college at Jervis Bay and a national capitol at Canberra; surely a skilled man could find work at one of those sites.  So Hayes rode the train 100 miles down the beautiful Australian coast past Bulli, Wollongong, and Nowra through some of the most productive agricultural land in the country.  Upon arrival at Jervis Bay, the capitol project in Canberra hadn’t started at all and the naval college was only a forest of survey markers.  There would be work at Jervis Bay but not for a few months:  “In the meantime I must find something to do” – or starve.

A local “bush merchant” offered to stake Hayes weekly food deliveries if Hayes would gather grass tree gum.  Germany buys the gum from yellow grass trees, “said to be for varnish, but one wonders”  – perhaps the inventive Germans turn grass tree gum into “an engine of destruction.”  In any case, a “fair patch” of gum trees grows within site of the survey crews at the naval base, which relieves the loneliness of the bush and puts Hayes first in line for paid work when construction begins.

After the quarrel with Greer and Hammond over the plantation, Hayes writes, “Somehow I’m glad to be alone.”  His diary in this quiet solitary time describes the local geology, the magnificent bird life of Australia and New Guinea, the fauna, and the insularity of the Australian bushmen (as he calls the European immigrants).  Most bushmen are illiterate, though they have a “native intelligence and know what is going on around them.”  That, and they know everything about two other subjects:  boxing and the Australian Robin Hoods.  At campfires every night all across Australia the exploits John L. Sullivan, Jim Corbett, and Jim Jefferies alternate with tales of the bushrangers Ned Kelly, Ben Hall, and Captain Moonlight

May 25 finds Hayes cutting gum alone in the Australian outback sleeping nights under a shabby tent that doesn’t quite turn the cold rain of the start of Australian winter.  But Massson, “a genial Frenchman who is in charge of the gangs” at the naval college knows Hayes’ work ethic by his gum production and promises him a place.  This good news of a job offsets a disturbing letter from home telling of the death in Oregon of his uncle Thomas Jefferson Perkins.  “It causes a certain feeling of loneliness, knowing I will see him no more.”

By mid-June Hayes sits sharpening the axe Masson issued him outside his tent now pitched on a “street” in the permanent encampment at the Jervis Bay construction site.  Fortunately he’s as good with an axe as these Australian axemen – “artists in their line” – because some of the locals resent a foreigner given a chance on the crew. 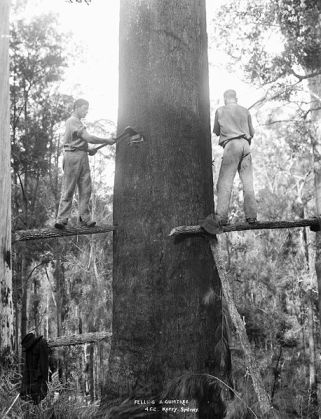 Felling a gumtree, Australia circa 1900

In late July Hayes’ irrepressible industry brings trouble.  First, he’s been out gathering honey to share around the camp.  Second, he’s been barbering the other men free of charge.  This is a union camp:  you can’t give honey to the bosses unless you’re a suck-up, and you can’t do more than one job.  “My immediate superior is a leader in this anti-foreign crusade.  We had a good round the other day.”

Hayes got the last laugh on the anti-foreign supervisor a few days later.  Hayes had made two kerf cuts on the way to felling a tree three feet in diameter when the minister of naval affairs for all Australia happened to be strolling on inspection of the site.  Just before the giant tree fell, the minister’s small cadre stopped to watch allowing Hayes to overhear the minister give a little patriotic speech: “Gentlemen, Let me point out to you an example of our Australian axeman!  Superior to those of every country, observe for yourselves!”  (Hayes’ quote.)  No one corrected the minister’s misidentification of nationality, but the timekeeper for the entire work, hearing the speech and knowing Hayes, promoted him to head the timber yard (a position superior to his anti-foreign supervisor).

As the last cold winds of September promise Australian spring, Hayes has the timber yard organized well enough that the anti-foreigners can’t fault his work.  But he’s still upsetting them by cutting hair.  With three hundred men now in camp, and the nearest barber twenty miles north, men line up on Sundays outside his tent.  Hayes thinks of it as “an accommodation” to be performed without charge.  He’ll even do it for a union boss, but when the clean-shorn boss tossed him a shilling, Hayes knew well enough to avoid that trap and tossed it back.  Had he accepted payment, they would have run him off for doing more than one job.

By November Hayes has flowers growing around his tidy tent.  The union bosses suspect more sucking-up and worse yet, wives of officials at the construction site compliment him!  Time to be thinking about returning to the US.  The compliments are bad enough but he’s also got too much money for his comfort.  The construction site has no bank so he has to carry twenty pounds earned from the sale of gum and six month’s salary on his person at all times.  Furthermore, he’s worried about inflation:  The Australians unions are bothersome and inefficient and, though Hayes admits they may have once remedied some evils for the workingman, they are now running the country into massive debt at 7% interest.  “Yes, it is time to leave a country like this before the money I have earned is valueless.”

Mid-summer in Australia means winter in the US, so Hayes dawdles at the job for a few weeks more at the naval base robbing honey trees with a pal and trying “to steal as near as possible to feeding kangaroos before they become aware of our presence.  Then, to see them leaping with twenty-five foot jumps – it is a sight to behold.”

Just before Christmas 1912, Hayes quit the naval base.  By now he says all the union bosses protest his departure; they “Now realize I was not distributing honey [and] cutting hair to gain the goodwill of the bosses.”  But their change of heart came too late – Hayes needs to check in with his family in the United States.

On the first short leg of his journey halfway around the world, Hayes rode the coach from Jervis Bay to Nowra with a “peculiar chap” whom all the men call Buffalo Bill “for he affects long hair and a Stetson hat.”  To Hayes he may be a dime-store cowboy, but he’s also a bona fide expert snake handler.  Collectors in Sydney will pay seven shillings-sixpence for poisonous black snakes – and Buffalo Bill has a sack full.  The bushman driving the coach to Nowra knew Buffalo Bill’s business and wouldn’t let his “writhing mass of reptiles” into the compartment so the sack of snakes rode to Nowra dangling beneath the vehicle.  However, anonymous on the train from Nowra to Sydney, Bill heaved his sack onto a rack directly over the heads of several female passengers.  The snakes weren’t bothered.  The women, ignorant of the sack’s contents, weren’t bothered.  Buffalo Bill retrieved his sack and departed the train.  At that point Hayes felt it necessary to explain about Buffalo Bill and his sack, “and they almost screamed then.”

“Sydney is the same dusty city.”  Greer and Hammond are no friends, though they want him back on the plantation project.   Yes, Hayes remains convinced that December is a pretty good time for leaving Australia –  by Christmas day he’ll be sailing west, then north toward the Suez Canal on a German freighter, across the Mediterranean, then the Atlantic to arrive in Washington DC by March.

This entry was posted on Sunday, May 13th, 2012 at 8:44 pm and is filed under Diary, geo-biography, google earth, Google Maps, History, Travel. You can follow any responses to this entry through the RSS 2.0 feed. You can leave a response, or trackback from your own site.